- Turbo mode is able to increase to 2 times the current and power of electronic load in a short period which is the most suitable for Fuse / Breaker test and short circuit, OCP, OPP test of AC power supply.

- Time measurement can be applied to batteries, UPS, fuses and circuit breakers and other tests.

- Eight units parallel up to 90KW and three-phase △ or Y load connection can be synchronized control by one master unit.

- Support on-load boot: at first set Load ON to support on-load boot, inverter or uninterruptible power supply is turned on directly with the set load current, used to verify whether the starter is stable when the Inverter is connected.

- The most complete measurement capabilities

In addition to these measurement functions, it also provides time measurement, products such as UPS, fuses and circuit breakers etc. trip or blow time and transfer time for Off-line UPS. 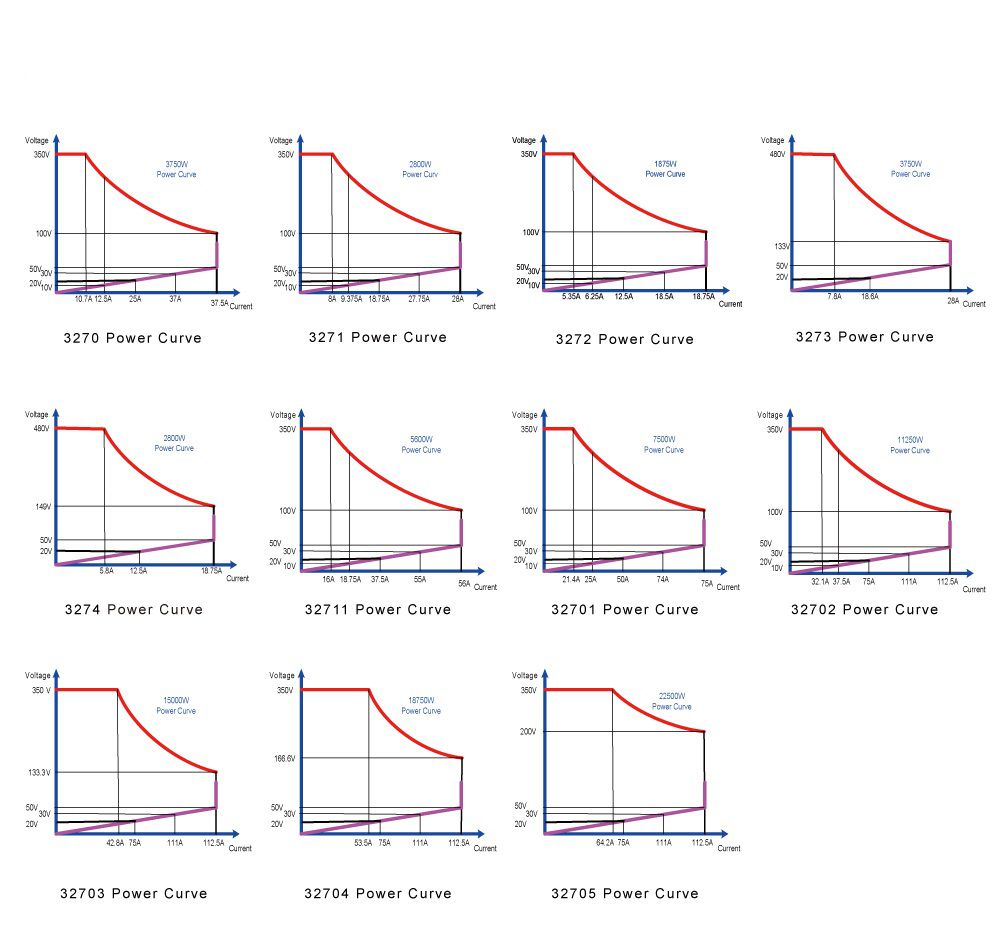 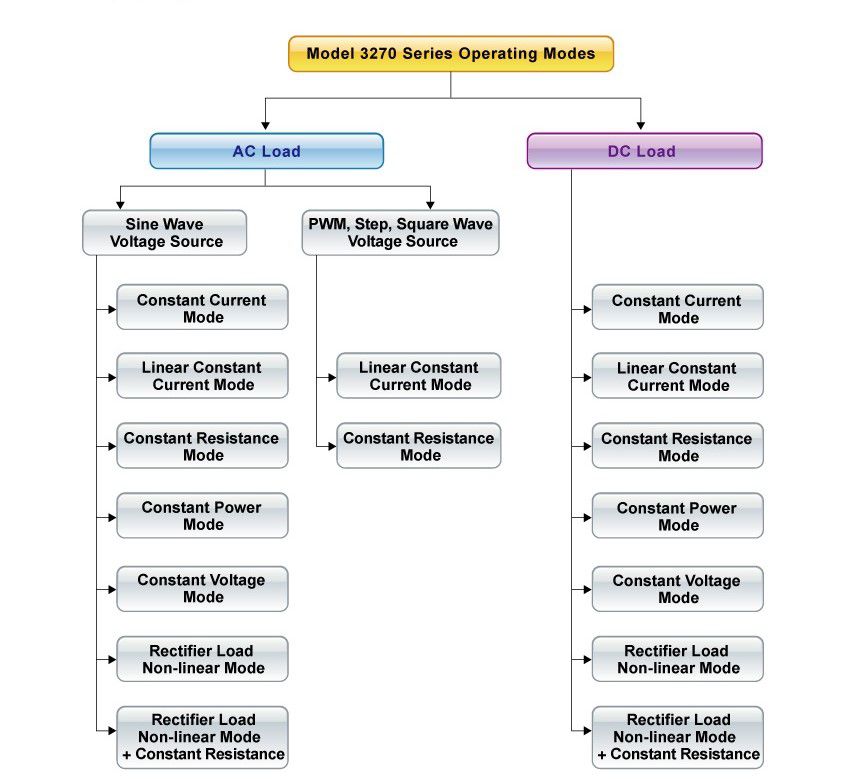 Supported on-load start-up: at first set Load ON to support on-load start-up, inverter or uninterruptible power supply is start-up directly with the set load current, used to verify whether the Inverter is stable when the load is connected during start-up.

Supports the loading and unloading current angle control the loading and unloading current angle range of 0-359 degrees can be programmed to verify whether the Inverter output voltage transient response is stable during the actual electrical appliance is connected or turn ON / OFF randomly it can be used to verify the Overshoot / Undershoot response is within the desired range. 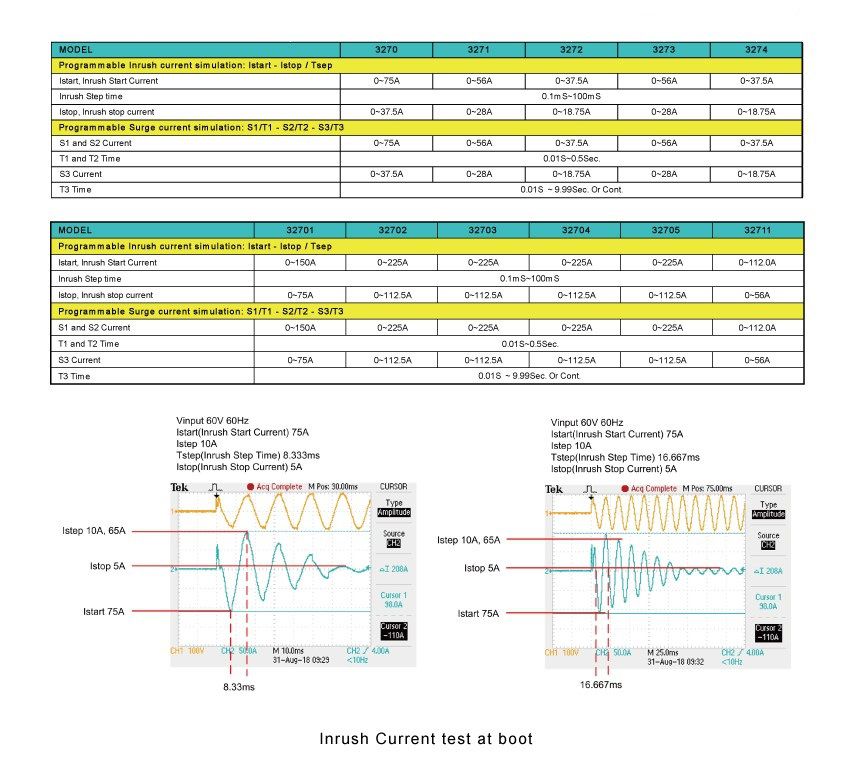 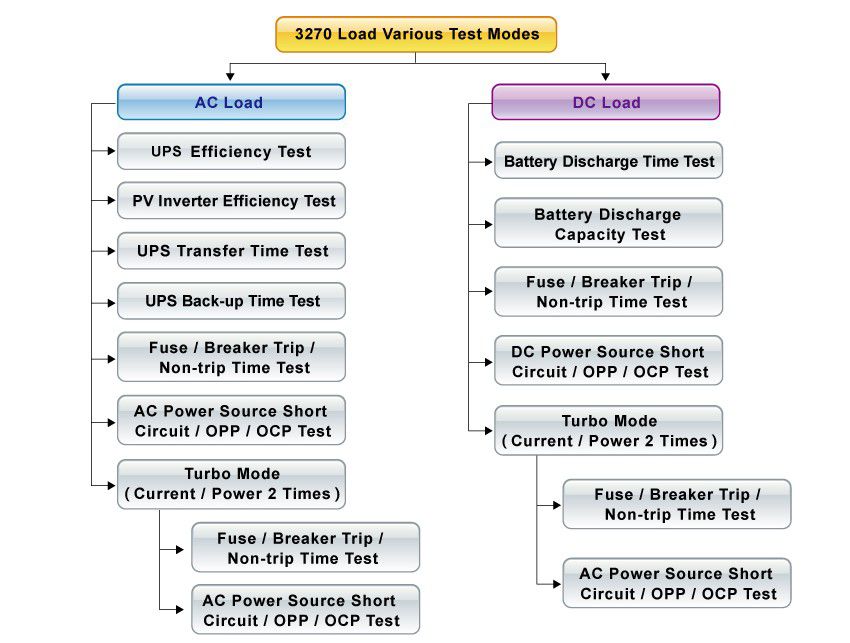 Current protection component includes Fuse, Circuit breakers and a new PTC Resettable fuse etc..., its function is when the circuit current exceeds the design of the rated value, that is, if the load exceeds the design of the current capacity, the circuit will be disconnected, in order to avoid overheating, even fire. Fuse is a one-time use of the protection components, Breaker and PTC can be reused.

Due to this feature, the 3270 series AC & DC electronic load, in particular for the verification of current protection components, has developed a Fuse Test function to test and verify such protection element with an electronic load of rated current and power. When Turbo mode is set to ON, the test current can be up to double the maximum current within 1 second of test period. Take 3270 as an example, the maximum test current can be doubled to 75A. That is, when the Turbo mode of the 3270 series is ON, the test current value can reach to 2 units 3270 series (normal mode) within 1 second test period. 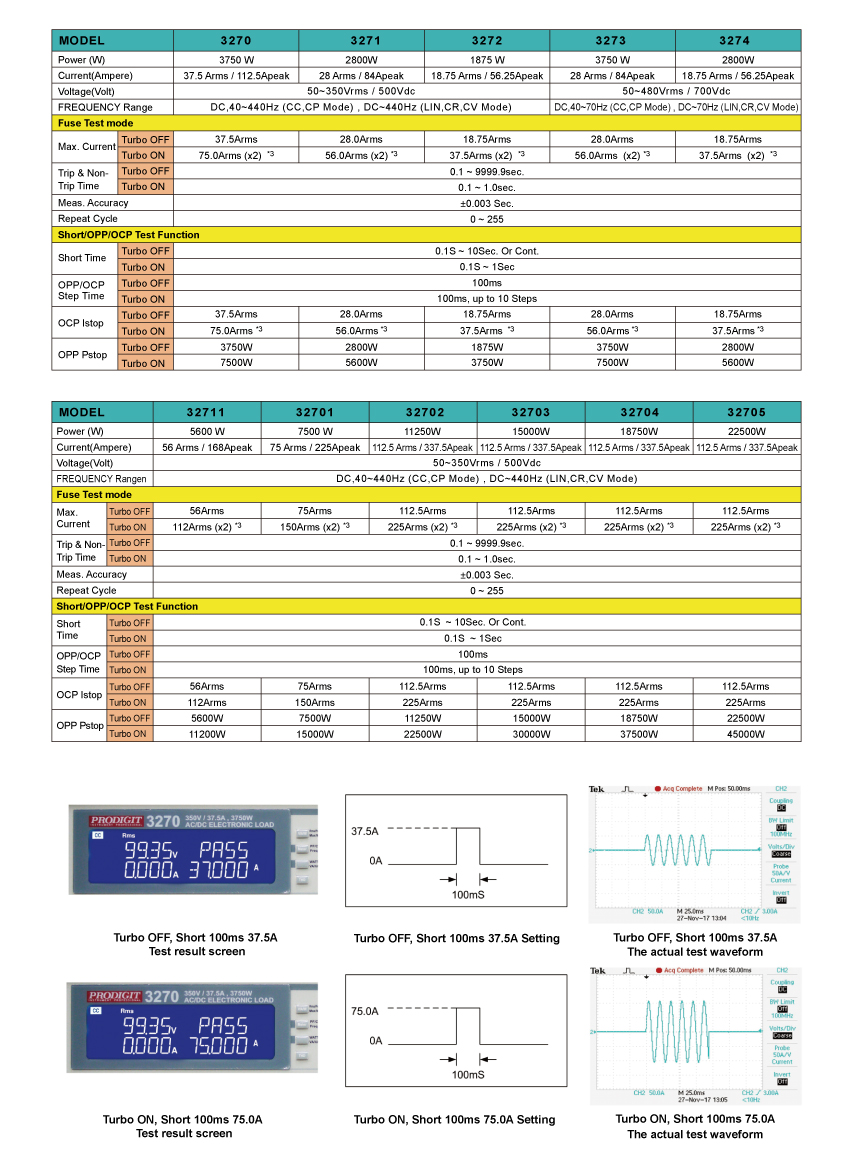 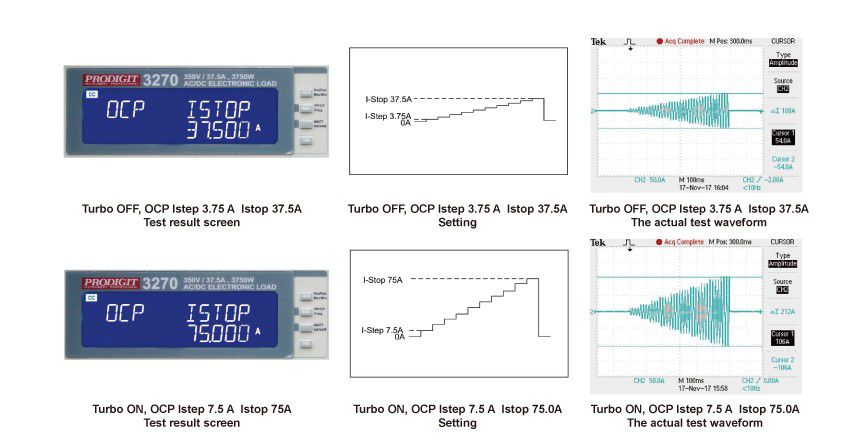 In the Trip fuse test, it is used to test when there is too large abnormal current the Fuse or Bleaker must be able to provide the protection of the circuit breaker, that means current protection components need the fuse action, therefore the test current needs to be larger than the fuse current rating.

When the 3270 Series AC & DC electronic load detects a voltage lower than 1.0V, the LCD displays the number of Repeat Cycle and Current Protection Fusing Time XXXX_X sec.
In the Non-Trip (no Blown) test, the current protection component is required to achieve non-blow action, so the test current needs to be lower than the fuse current rating that is used to verify the fuse must not blow during normal current range. When the 3270 series AC & DC electronic load is not blown after the test time (Pulse Time) and the repeated Repeat number, the LCD displays the information of the Repeat number. 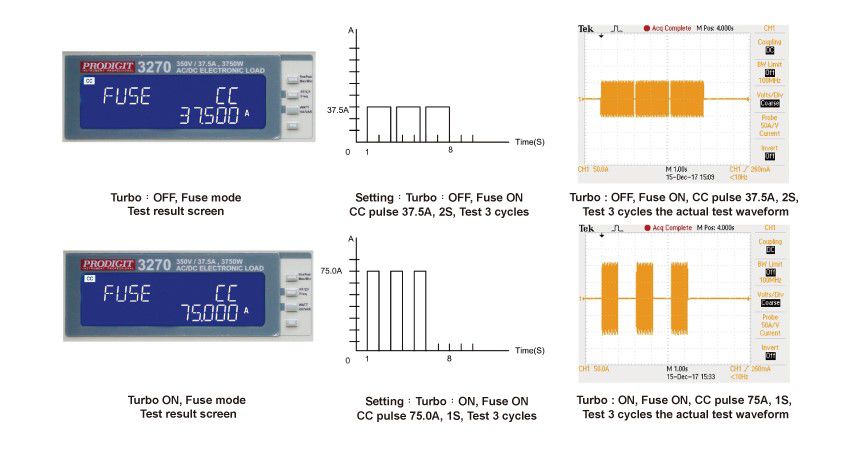 3270 series AC & DC electronic load has built-in new TYPE1 - TYPE3 battery discharge test, you can select the desired battery test mode, the test results can be directly displayed on the LCD display for battery AH capacity, the voltage value after discharge and the cumulative discharge time.

The 3270 Series AC & DC load provides multiple units in parallel, three-phase applications that allow users to test applications with greater power or three-phase AC power, this is more flexibility to use the 3270 Series AC & DC Electronic Load for control. In parallel / three-phase operation, the user operates the unit as the operation of a single machine, as long as the Master can be operated, Slave1 and Slave2 will automatically sink the load and measurement Parallel and three-phase connection as shown below. 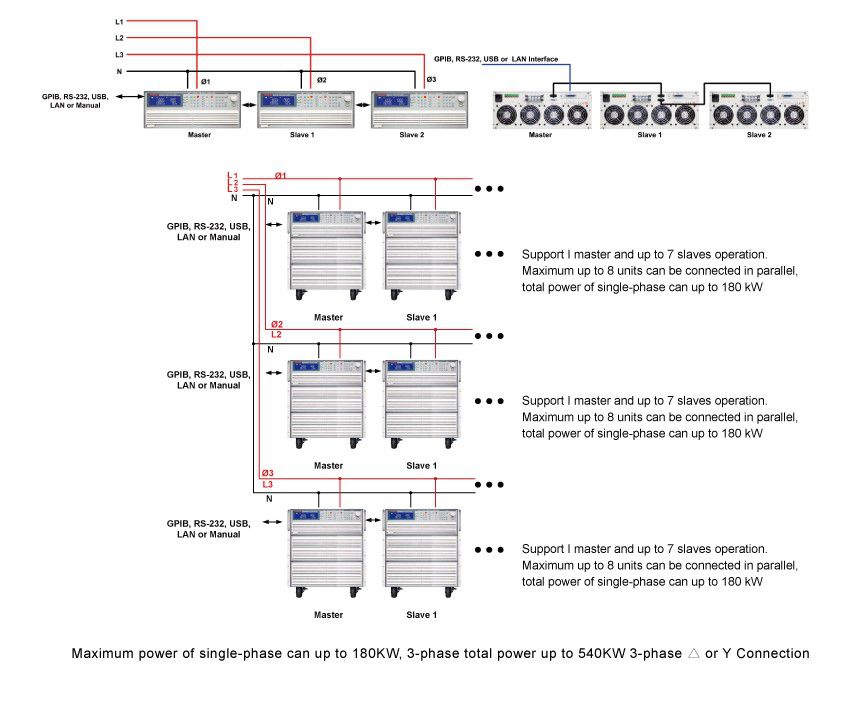 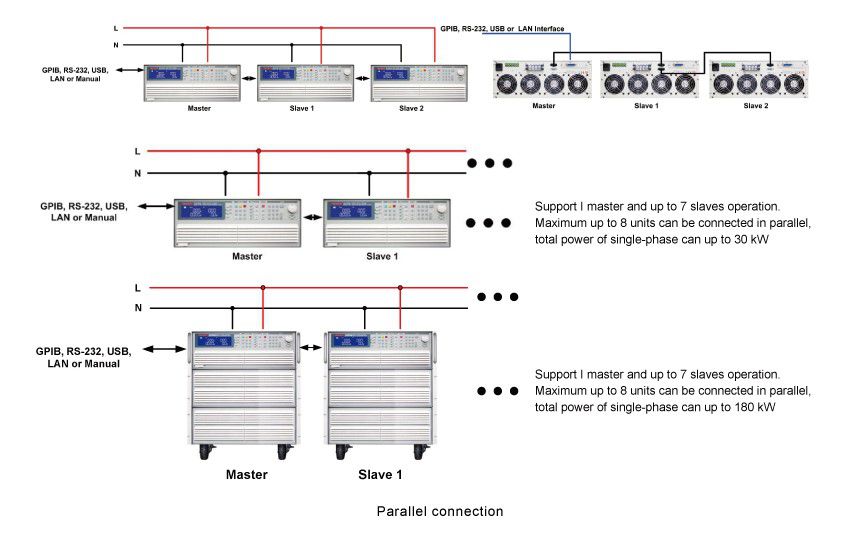 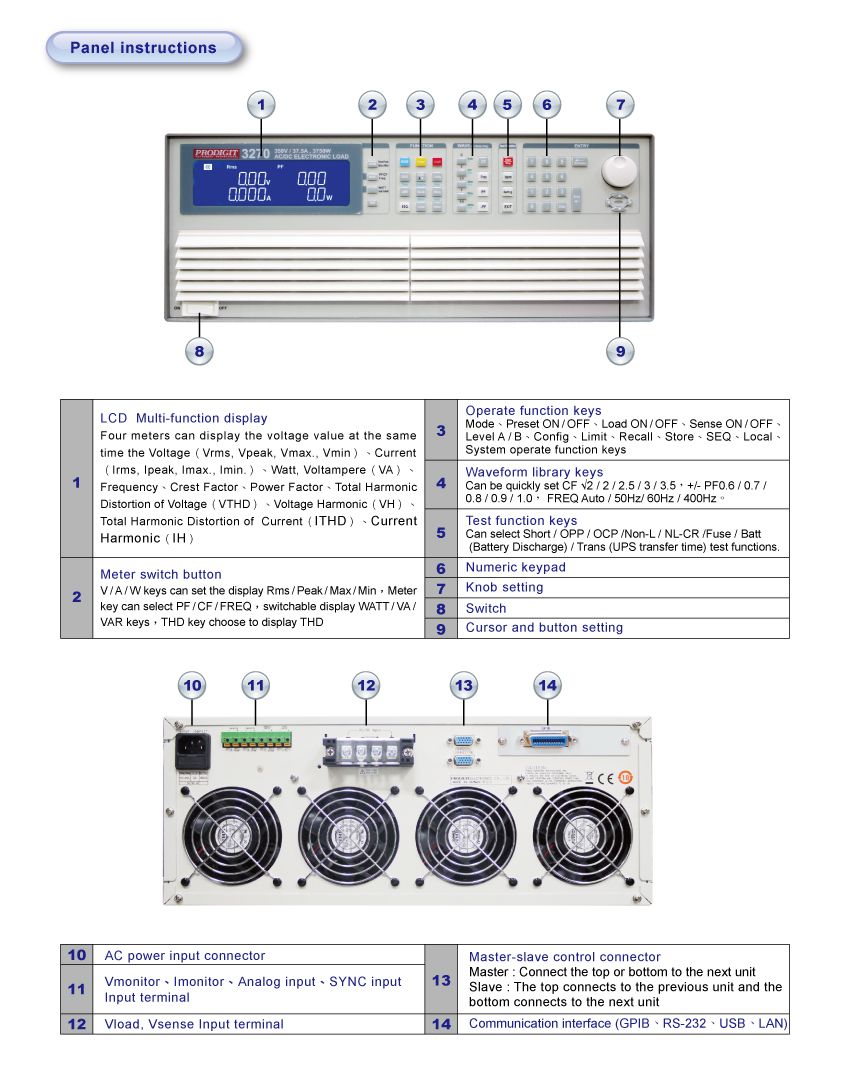 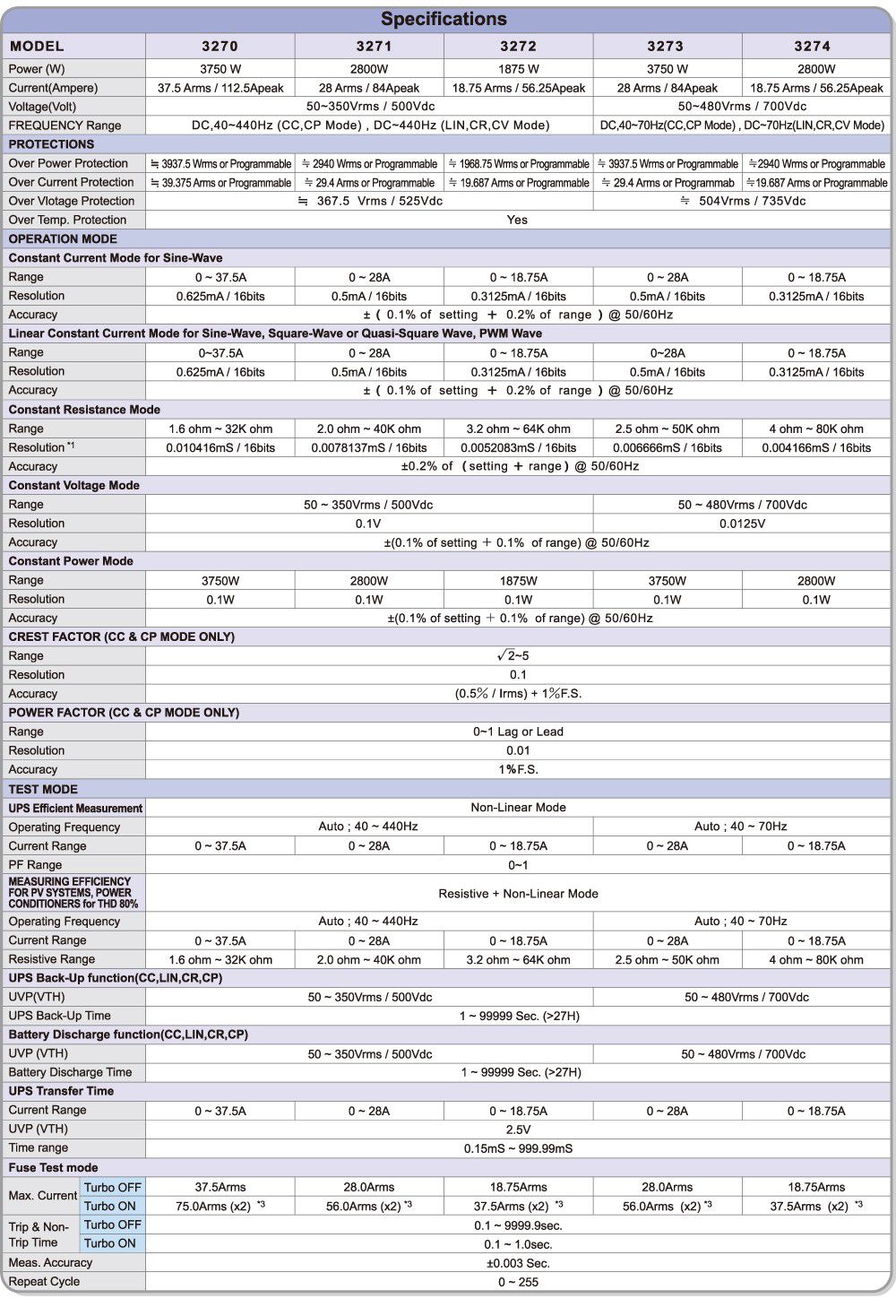