The use of batteries to power a multitude of portable devices such as mobile phones, tablets, laptops, etc. as well as mobility products like electric bicycles, scooters and cars has become widespread.

During actual operation in these applications, the battery output current changes dynamically with the operation of the product. In order to assess battery life, capacity and any time related characteristics that may occur during use, it is important to test the batteries using actual battery load current waveforms under both general and worst case conditions.

To implement these irregular load current waveforms on an electronic DC load, there are two methods that can be used:

The first method relies on the use of a digital storage oscilloscope and a current measuring device such as a current probe or shunt to capture the actual battery discharge current waveform under real-world conditions. Once captured, the next step is to take this waveform data and transfer it to an arbitrary waveform generator.

1. Use the arbitrary waveform generator to edit the load current waveforms manually as needed.

2. The output of the arbitrary waveform generator is then sent to the analog input of the DC load.

The second method is to use the new 9923 load current generator which can be installed on a wide range of Prodigit’s DC electronic loads. The generator output is connected to the DC load’s analog input using the provided BNC cable and eliminates the need for a separate arbitrary generator. Use either manual waveform data editing or import and oscilloscope waveform to generate simulated load current waveform on the DC load.

PC application software is provided with the 9923 generator to allow waveform editing, oscilloscope waveform download and other programming functions.

The DC Load Current Waveform Generator supports up to 2048 steps per timing sequence output voltage and the ability to cycle this waveform up to 9999 times. With the included 9923
application software, the user can generate the desired load current waveform. The output of the Generator is connected to the ANALOG INPUT terminal of the electronic load cause it to sink the specified current waveform. Refer to the current sink example shown in Figure 1. The 9923 technical specification is as shown below. A generator output voltage of 10V is equal to the maximum current value of the electronic load used. An output of 5V is equal to 1/2 the maximum current specification of the load, and so on. 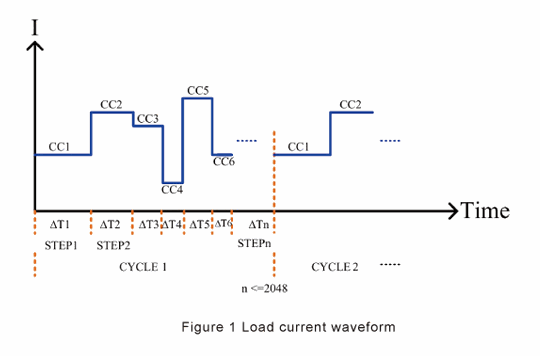 9923 Current Waveform Generator Application Software
The included 9923 Load Current Waveform Generator Application Software may be used to edit waveforms that provide the user with a variety of real load conditions on his electronic load. Up to 2048 steps in each timing sequence can be edited.
The timing sequence programmed can be cycled up to 9999 times. The minimum available time for each timing step is 50us and the maximum length of a sequence is about 130,000 seconds or about 36 hours. Using the electronic load's measurement function, the voltage, current and power status when sinking current can be monitored.
In addition to manually editing the required current waveform, the user can also use an oscilloscope to capture and store the actual current waveform using a comma-separated value file (*.csv). The 9923 application software can read this current waveform file and then download it to the 9923 Load Current Waveform Generator for Electronic load simulation use.

a. Use the self-editing load current waveform to simulate the method of reproduction:

b. Use the oscilloscope's load current waveform (*.csv), after it has been processed by the 9923 application software, then download to the 9923 to simulate current:

c. Time Range: Select to use the time specification 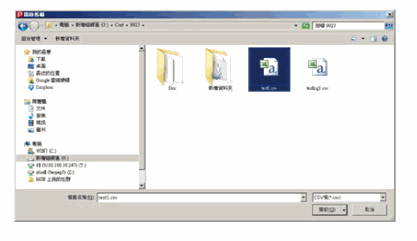 g. Save to File: Save the test step setting values to the specified file. 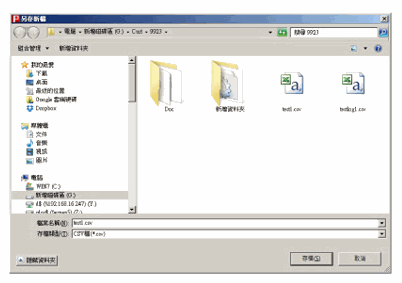 h. Addition: Add a test step after the last test step, maximum up to 2048 test steps. The program will display an error message if there are more than 2048.

2. Time: Set the output voltage time, the unit changes according to Time Range.

i. Delete: Delete a test step.

j. Insert: Insert a test step after the currently selected test step, maximum up to 2048 test steps. If there are more than 2048, the program will display an error message.

2. Time: Set the load time, the unit changes according to time range

3. Insert: Make sure to insert a new one.

*Double-click to edit the column, press [Enter] to set. If [Enter] is not pressed, the program will not make changes.

*When the modification is complete, the timing diagram will change and will automatically move to the next step to provide the changes.

*When pressing [Enter] in the last step, the program will automatically go to the next channel to allow more changes.

m. Cycle Times: Set the number of cycles, maximum up to 9999 times.

Check the Log to File box and the program will automatically generate the serial number YYYYMMDDhhmmss. The user can also change this field manually. This field will be used to create a log to file name, followed by a 0001 count number. The test log file will be stored in the TestLog folder.

- Double-click to edit the column, press [Enter] to set. If [Enter] is not pressed, the program will not make changes.

- When the modification is complete, the timing diagram will change and will automatically move to the next step.

- When pressing [Enter] in the last step, the program will automatically go to the next channel to allow more changes.

1. First, the PC must be connected to the 9923 to perform an interface connection detection. lf the system does not use the 9923 card or has already started and has not restarted LOAD, the system will prompt alert [Please check 9923 card is installed in the Load, then restart the Load.], Press OK to exit the start function, as shown below.

3. After starting the test, if you set the Measure Time to a value greater than 0, the program measures the voltage, current, power and other information, and records in the Test Log according to the time interval set.

t. Cut Block: Delete the data outside the block.

Users can adjust the position of Ux and Dx to reduce the amount of data. 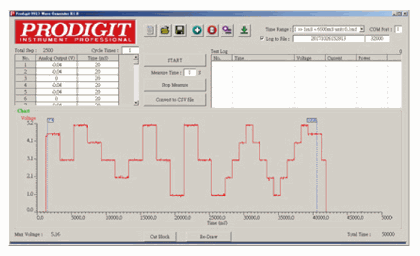 C Stand-alone application (no need for a computer connection)

The 9923 supports stand-alone operation as well. In this case, the user needs only to download the waveform data to the 9923 EEPROM. If there is no need for the application software to record the voltage, current and other information, the computer connection can be removed. The user only has to press the Start button on the 9923 rear-panel itself. The analog output will begin to load according to the edited voltage level and feed the analog input of the timing output voltage signal to the electronic load. Users can also use the Start key terminal connection (External Start key) to connect an appropriate length remote external button if more convenient.

The 9923 can be applied to multiple parallel loads as needed. Because the 9923 current waveform generator uses the analog input function to control the load current, when the load power or load current is insufficient, you can obtain higher power and current using multiple loads. The 9923 supports parallelled operation of to up to three electronic loads. The 9923 rear panel provides 3 sets of Analog outputs (internal paralleled). In cases where more than three loads in parallel are needed, the user can use a T-type BNC connector to extended the output signal to more loads. The 9923 Current Waveform Generator Application Software scales corresponding waveform voltage level as the sum of the current of the parallel loads. For example, when 3 sets of 3311F 60V / 60A/ 300W are required to test 120A, each 3311F must allocate 40A current Analog input. This requires 6A / V, 40/6 = 6.66V. Thus, the 9923 application software voltage must be edited to 6.66V and then through the following diagram connected in parallel with three 3311F’s. Each 3311F will see an input voltage level equivalent to a 40A load current, resulting in a total of 120A.